Home to much more than just safaris, beaches, and the pyramids, Africa is both the second-largest and second most-populous continent on Earth. Its 54 mainland countries and island nations all boast their own unique history, heritage, and culture, and this is, in part, what makes traveling around Africa so fascinating.

While beautiful beaches and rugged cliffs line its long coastline, its vast interior encompasses everything from mountains and deserts to tropical rainforests and the Nile river. Scattered around these diverse landscapes, you’ll find astonishing historical sites, secluded villages, and huge metropolises.

Home to a vast array of different cultures and languages, Africa offers an intoxicating mix of old and new, as many of its age-old traditions and customs still survive to this day. Renowned for its amazing wildlife, Africa’s outstanding natural beauty makes it a delight to explore, and its riveting historical and cultural sights mean there is something for everyone to enjoy. 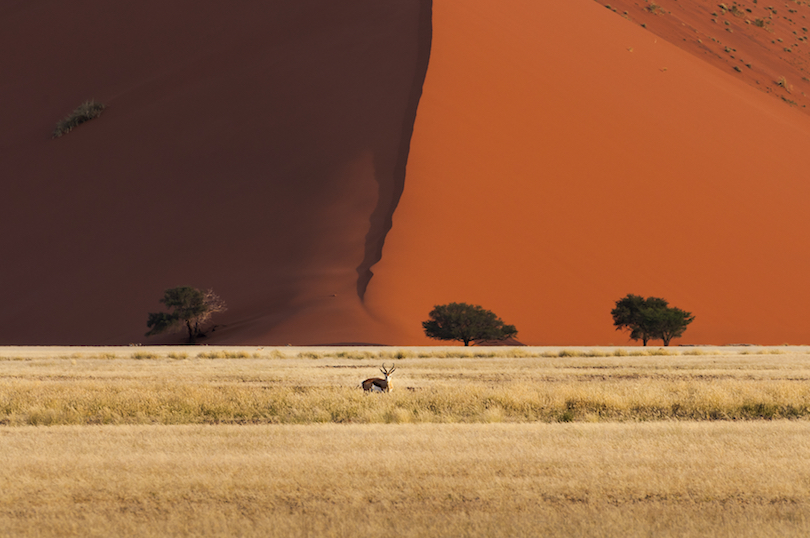 Nestled away in the southwest of the continent, Namibia is one of the most sparsely populated countries in Africa. This is because much of it is made up of arid, desolate landscapes and the unforgiving Namib Desert. Formerly a German colony, it only gained its independence from South Africa in 1990, so some colonial-era architecture can still be seen in its capital, Windhoek.

Most people, however, visit for its brilliant national parks, which are home to breathtakingly beautiful landscapes and incredible wildlife. In Etosha National Park, for instance, you can catch glimpses of lions, elephants, and black rhinos roaming around the Kalahari. Another popular destination among tourists is the Skeleton Coast, which has lots of spooky but strangely scenic shipwrecks dotted along its dangerous Atlantic Ocean coastline.

Although it is often overlooked in favor of Kenya, Tanzania, and South Africa, Namibia and its incredible national parks are hidden gems just waiting to be discovered. 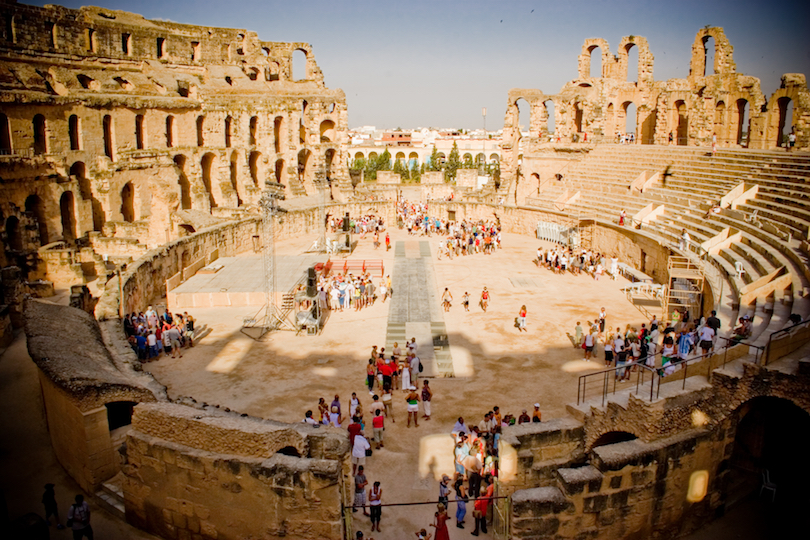 Long a popular tourist destination, Tunisia can be found wedged in between Algeria and Libya on North Africa’s Mediterranean coastline. Due to its fabulous warm weather, inviting beaches, and well-developed tourism industry, lots of Europeans come here to lounge on its golden sands and swim in the sea.

There is much more to Tunisia than just sun, sea, and sand: the country is also littered with impressive archaeological sites that date back millennia. This is because, throughout its history, it has been ruled by everyone from the Carthaginians, Romans, and Ottomans to the Arabs and later on French. Of its many historical sights, the stunning Roman amphitheater in El Jem and the remnants and ruins of Carthage are the undoubted highlights.

In addition to this, it also has the Atlas Mountains for you to explore, as well as the lively coastal cities of Sfax, Sousse, and Tunis – its vibrant capital. If all this wasn’t enough, the endless sands of the Sahara beckon you on with their alluring dunes, troglodyte dwellings, and secluded desert oases. 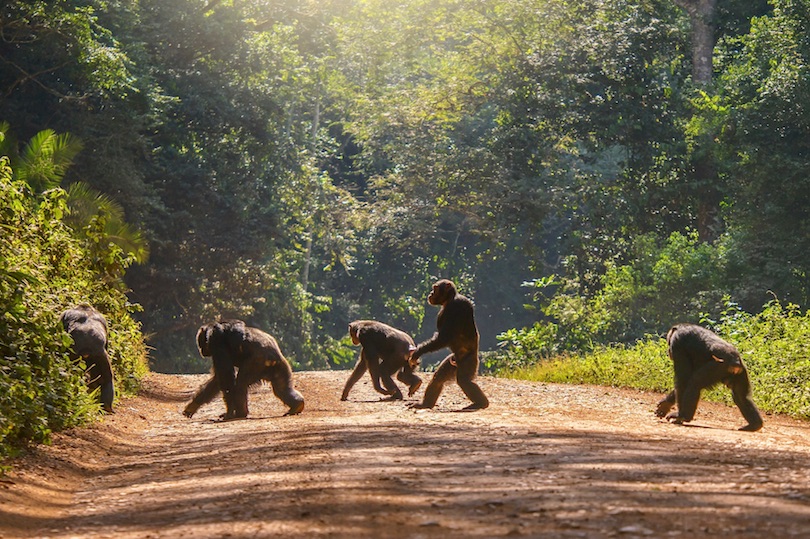 Home to not only the continent’s tallest mountain range and the source of the Nile, land-locked Uganda also borders the largest lake in Africa. While its tourism industry and infrastructure are quite undeveloped in comparison with neighboring Kenya and Tanzania, this makes its spectacular landscapes all the more exciting to explore.

Long overlooked by visitors to the continent due to its tumultuous and tragic past, Uganda is slowly regaining its title of the ‘Pearl of Africa.’ This is in large part because it is one of only three countries in the world where you can see mountain gorillas in the wild. Seeing the majestic creatures up close in the cloud rainforests of the Rwenzori Mountains is an amazing experience, and is simply a must when in Uganda.

Besides trekking through the dense undergrowth, you can also go white-water rafting down the Nile or go on safari to spot the Big Five. With so much stunning scenery on show and so much wildlife for you to spot, it is well worth heading to Uganda now before it becomes even more popular. 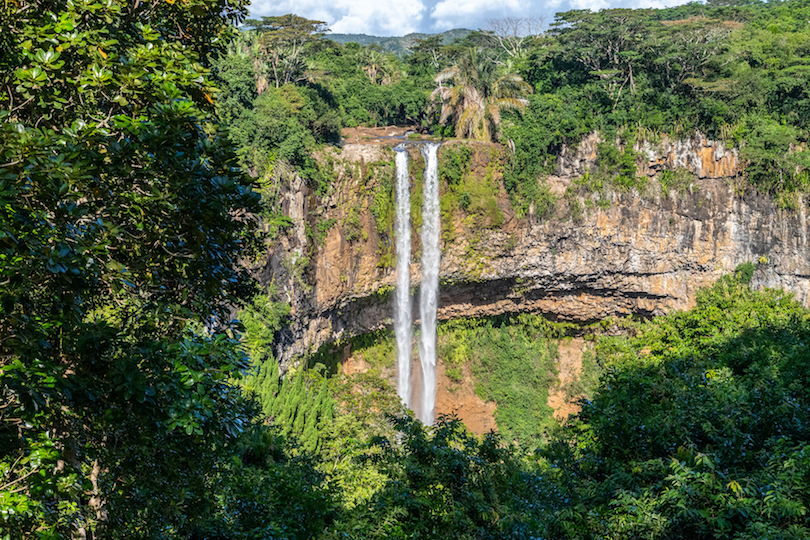 While Mauritius certainly takes some getting used to, visitors invariably come away astounded at the incredible beaches, mountains, and waterfalls on show. Located over 1,000 kilometers to the east of Madagascar, its remote setting means it is home to some of the rarest plants and animals in the world.

As such, trekking through its mountainous interior really is a treat as flocks of brightly colored birds swirl above the tropical rainforest canopy. Tucked away among the dense foliage, you’ll come across steep ravines, plunging gorges, and sparkling waterfalls. All in all, the volcanic landscapes certainly make for some of the most picture-perfect scenes imaginable.

Lying alongside the inviting waters of the Indian Ocean are idyllic white sand beaches for you to lounge on, and lots of fantastic scuba diving and snorkeling can be had offshore. Due to the diverse make-up of its population and unique cultural heritage, Mauritius is also renowned for its delicious and varied cuisine. You can try some of its brilliant French, Chinese, or East African inspired dishes in any one of the sleepy, laidback fishing villages that dot its shores. 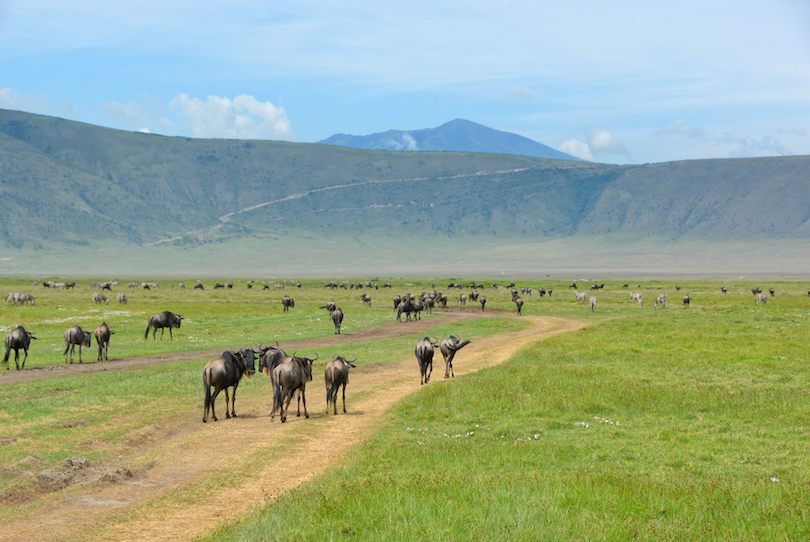 With so much to see and do in Tanzania, it can be hard to know where to start. The north of the country alone is home to the marvelous Ngorongoro Crater and the world-famous Serengeti, both of which are must-visits if you want to go on safari and see the Big Five. Here too, you will also find the snow-topped Mount Kilimanjaro – Africa’s highest peak.

Indeed, this wonderful part of East Africa is blessed with a myriad of different landscapes, each more arresting than the last. Its Indian Ocean coastline, for instance, is lined by magnificent beaches and the nation’s largest and most vibrant city, Dar Es Salaam. Just offshore, you can also find the awe-inspiring Zanzibar archipelago, which boasts many glorious beaches and is a popular tourist destination in its own right.

One of the most linguistically and culturally diverse countries in Africa, Tanzania is also home to some very important and impressive archaeological sites that date back millennia. With three of Africa’s Great Lakes found partly within its confines, Tanzania certainly has something for everyone, whether you’re into history and nature or culture and wildlife. 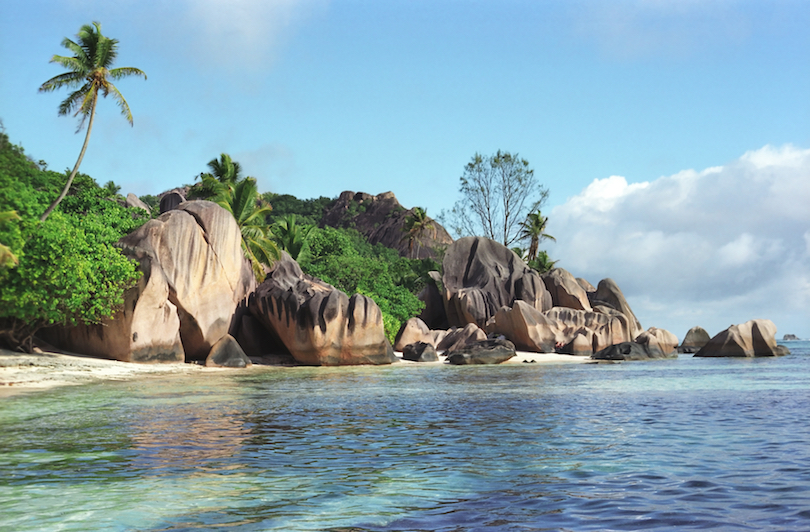 Lying some 1,500 kilometers to the east of mainland Africa, Seychelles is the continent’s smallest and least populous country. Made up of 115 islands, with the vast majority of them being uninhabited, the archipelago is incredibly beautiful and is surrounded by the glittering waters of the Indian Ocean.

While the paradise islands are lined with gorgeous beaches, their interiors are quite mountainous and coated in lush rainforest. Due to their remote location, they are home to all kinds of unique fauna and flora, and most of them are now designated nature reserves. Offshore, the colorful coral reefs and abundant marine life makes Seychelles an unforgettable place to go scuba diving or snorkeling.

On Mahe, the largest of the islands, you can find lots of luxury resorts, bars, and restaurants, as well as the nation’s capital, Victoria. From here, you can easily take a boat trip to some of the more secluded islands and beaches that lie nearby. 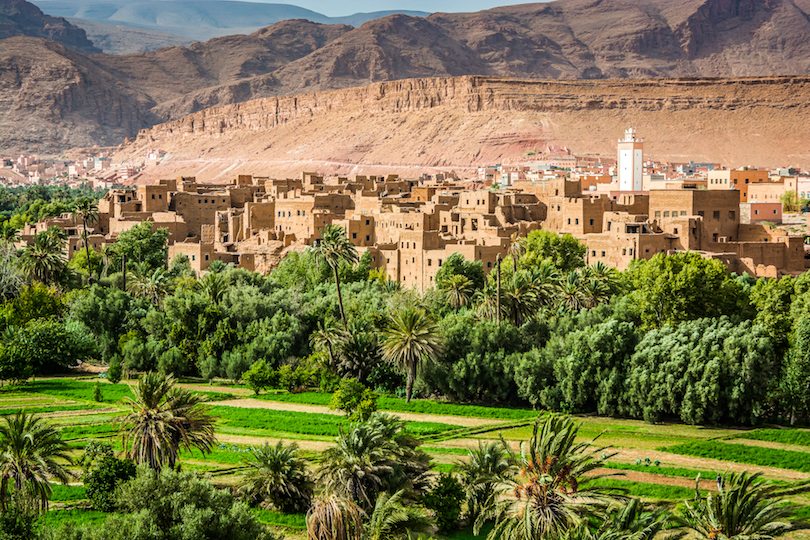 A magical place to visit, Morocco is home to a mesmerizing array of beautiful old cities, medinas, and souks. These lie along the country’s scenic Atlantic and Mediterranean coastlines or tucked away amongst the Saharan dunes and High Atlas mountains.

The continent’s north-westernmost country has long attracted different peoples and cultures to its shores, and its rich heritage now draws on African, Arabic, Berber, and Western influences. This amazing diversity is on show wherever you go, with Essaouira, Fez, and Marrakech being some of its most popular tourist destinations.

Besides exploring the lively Djemaa El Fna and gorgeous mountain city of Chefchaouen, visitors can lounge on one of the country’s lovely beaches or head off into the Sahara. With so many different sides to it, Morocco is definitely one of the most spectacular countries to visit in Africa. 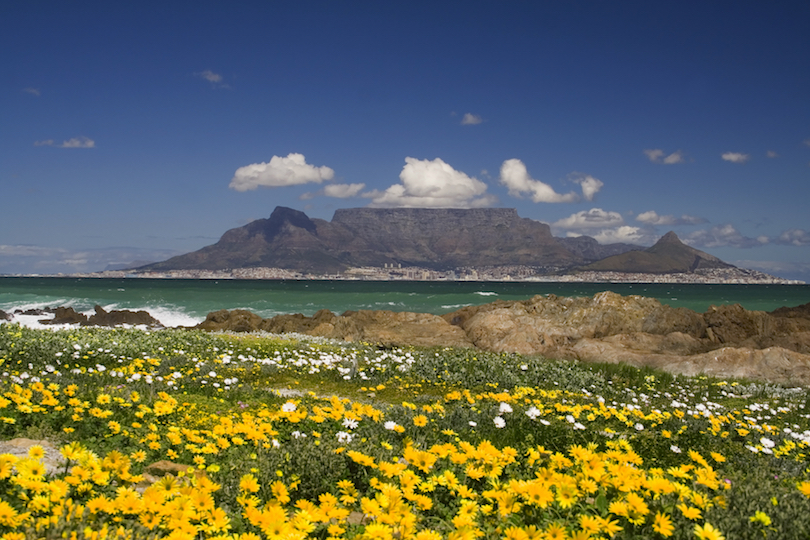 Occupying the southernmost tip of the continent, South Africa boasts some of the best and most well-run national parks and game reserves in Africa. Of these, Kruger is undoubtedly the most well known and most visited, with Addo Elephant National Park also being a popular draw.

Known as the ‘Rainbow Nation’ due to its multicultural population, South Africa’s cities are fascinating to visit, as each of them has its own particular look, feel, and identity. While Johannesburg teems with life, Cape Town is more laidback in nature and is overlooked by the spectacular Table Mountain, with the wonderful wineries of Stellenbosch lying nearby.

Home to not only the towering Drakensburg Mountains but the arid Kalahari Desert and lush Garden Route, South Africa truly is a delight to explore. To top it all off, both its Atlantic and Indian Ocean coastline are riddled with stupendous scenery and fabulous beaches. Many adventure seekers go diving with great white sharks offshore. 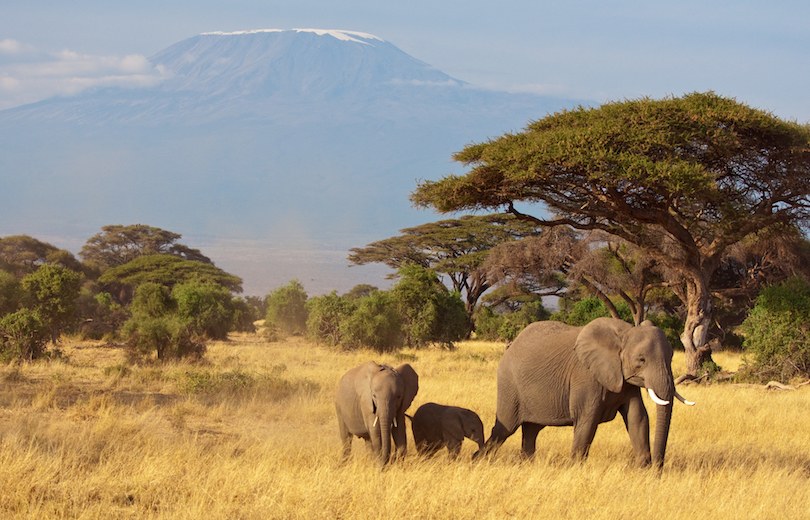 One of the best places in the world to see wildlife up close and personal, for many people, Kenya is the home of safari. Its endless savannah and arid deserts teem with life as lions, elephants, and buffalo roam alongside herds of antelope, flocks of flamingos, and the occasional black rhino.

Its dramatic landscapes are also home to some of the continent’s most famous peoples and cultures, such as the Maasai, Kikuyu, and Swahili, who each have their own rich languages and traditions. In stark contrast to their age-old ways of life, Kenya is also where you can find one of the continent’s most happening cities – its thriving and teeming capital, Nairobi.

Alongside its open plains are freshwater lakes and forests, and the Great Rift Valley cuts through from north to south. Coupled with the beautiful Indian Ocean coastline, this all makes Kenya one of the best countries to visit – not just in East Africa, but the continent as a whole. 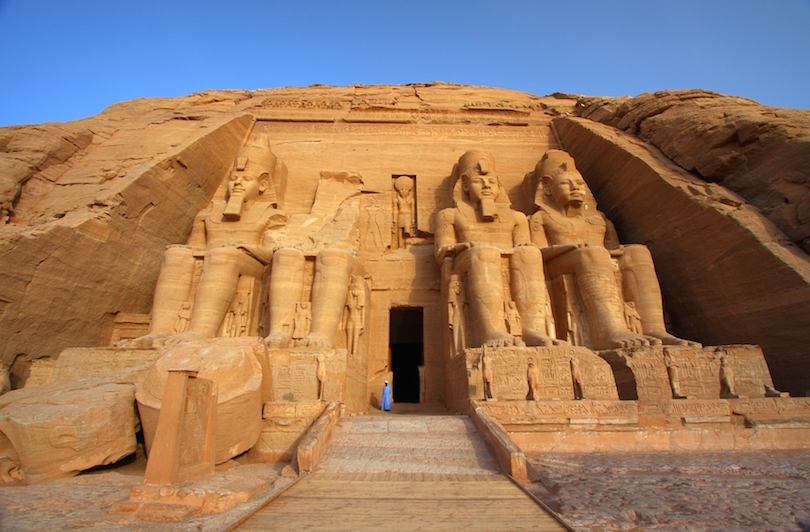 Renowned for its ancient monuments and archaeological sites that include the Giza Pyramids, the Great Sphinx, and the Valley of the Kings, Egypt is unlike any other country on Earth. Once home to one of the world’s greatest civilizations and cultures, history is on show wherever you go, with tombs and temples lying alongside statues and obelisks, all intricately carved.

Located in the northeast corner of the continent, Egypt is bordered by the Mediterranean and Red seas, with the Sahara Desert to the south and west of it. Running through Egypt is the Nile river, which is the life source of the country.

While many people come to see its historical monuments or explore all that Cairo has to offer, just as many come for its fantastic Red Sea beaches. With so much history and culture for you to delve into, and so much stunning desert and coastal scenery on show, Egypt really does have something for everyone to enjoy.

One thought on “10 Best Countries to Visit in Africa”